It has been  week now since the crowning of the season 10 winner of RuPaul’s Drag Race. If you do not know who the winner is *SPOILER ALERT*  the winner is: Aquaria!

This season has one of the strongest casts in Drag Race herstory in my opinion. Each week, it grew tighter and tighter until we made it to our top 4.

Prior to the finale, the season 10 reunion aired, however, based off all the energies in the room, it felt that they shot the reunion after the finale, just as they had done last season.

Aquaria felt very calm and was quiet throughout the episode. Asia seemed very

emotional. Kameron seemed quiet (as usual), and Eureka was not as talkative as usual.

Overall, it was a successful reunion. It seemed things that needed to be shared were shared. It also helped that it was an hour and a half, unlike the season 9 or the All Stars 2 reunion. When it was only an hour, it seemed like there were things still left unsaid (especially since there were people who chose not to attend the AS2 reunion and were the source of most of the drama).

During the reunion, The Vixen chose to walk out due to the fight Eureka and her had during Untucked and felt that the issue was not resolved. While Eureka was in the wrong for invading Vixen’s personal space, Vixen dictates her own actions. Ru was trying to say that they were both at fault. But, The Vixen felt that was not enough so she left. While Asia made strong arguments stating that one of them should have gone after The Vixen and needs love. However, The Vixen made her choices. She has to live with that. She could have handled this as an adult. However, she chose to disrespect the show, RuPaul, and her sisters by walking out. That was her choice. 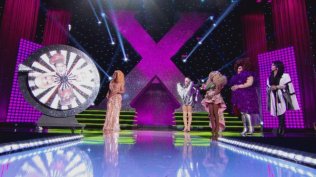 Based off of watching the finale, it could be editing, but, it seemed very clear to the audience who won the show.  Now, I’ll be honest when the Wheel of Fortune came out I was annoyed because I did not like how it was done last year because it seemed like they already knew who they lip syncing against, and what song. Nonetheless, that is the path the showing is going now.

Kameron ended up being the one who the wheel landed on. And she chose to lip sync against Asia. No shade to Asia, but I was surprise Kameron didn’t chose Eureka.

The lip sync they chose (or chosen for them) was “Nasty” by Janet Jackson. It was definitely one of the hardest lip syncs to watch. My top two prior to the finale was

Asia and Aquaria. So I was cheering on Asia. Since last season with Sasha Velours “So Emotional” , everyone thinks they need a gimmick to win the show.  Asia’s gimmick was to have butterflies come out of her. Well, nothing happened when she undid her bracelet.  Then she undid a breast, nothing happened and she thew up her breast in the

air. That was the moment when I knew it was all over for Asia. When the camera man showed Monique’s and Vanjie’s face, that was literally my reaction watching. The camera man was shady and showed the few butterflies that fell. Kameron ultimately wins the lip sync. I don’t know how well she was actually, because I was so focused on Asia. This could explain why for the next two weeks after the finale was shot she was always covered up in interviews or at PRIDE. Maybe she was embarrassed by her performance? Hopefully she will be considered for a future season of All Stars.

That left Aquaria against Eureka. The song they were given “If” also by Janet Jackson. This. This was the lip sync of the season. They both slayed it and they both showed that they wanted the crown. Ru decides they both move on. (Resort back to ep. 10 when Aquaria was mad both Kameron and Eureka stayed because there is only “one” magical double save. Now there was two this season.)

Prior to the top three lip sync it was the crowning of this years Miss Congeniality by the season one winner Nina Flowers and last year’s winner (fan favorite) Valentina. Typically, the fans vote on who wins. This year, there were people who tampered with the voting, so they had the queens of season 10 chose their winner. The season 10 Miss Congeniality is:  Monet X Change! Very deserved! 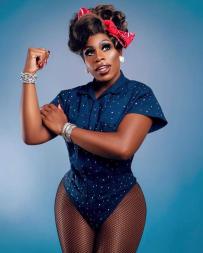 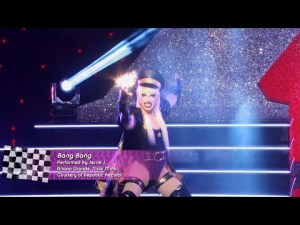 The final lip synce of the season was to “Bang Bang” by Jessie J, Ariana Grande. and Nicki Minaj. Aquaria literally started with a bang by having a sparkler. She continued with having confetti in the middle and the end of the song. Eureka had on her costume “The Big Girl” then a tear away to “Wins”. And Kameron changed her skirt……Kameron definetly danced her heart…but it seemed like her and Eureka did not know the lyrics to the song..which was interesting because I feel like everyone has known the song since it came out. Kameron just danced (did the same split for the 6th time) and didn’t move her lips. (Better than Charlie Hides or Valentina) And Eureka just seemed tired and just moved her lips. Aquaria did not miss a single beat and slayed the song.

Then the nerve-wracking moment comes that we’ve waited all season for. Regardless

of how they ranked throughout the season, it all comes down to this moment. It should be common knowledge that they film the ending three ways so that way there’s no spoilers. So at this point, the top 3 doesn’t even know who won, only Ru.

Aquaria is crowned the season 10 winner of RuPaul’s Drag Race. There are other seasons where I could argue as to why they the should not have been crowned the winner (cough cough Trixie Mattel) but Aquaria won 3 challenges, was never in the bottom 2, and had the best track record throughout the whole season. Therefore she should be the winner.

Now, the tea according to Reddit (so take this lightly) is that season 11 just wrapped shooting and All Stars 4 will begin shooting this month. So, we should be back to our favorite show within the next six months. Frankly, I do not know what I’m going to do on Thursday nights now since I made sure to be in front of my TV every Thursday the last six months.

For now, let us enjoy the dawning of the Age of Aquaria!